Deborah Metts
Deborah Metts is an East Coast agent who loves attending and covering New York Fashion Week. Her on-the-go must-haves include FIKA coffee, CO Bigelow Lotion, and shiny pair of menswear oxfords. When she's not covering a fashion event you can probably catch her hitting up a new eatery or art show in her Uptown nabe.
more
Twitter Facebook Google + Tumblr

Mercedes-Benz Fashion Week in New York is nipping at our stilettoed heels and the anticipation for fall 2015 collections is building, making it almost impossible not to get caught up in the flurry of industry activity. The city will be rampant with A-list celebrities and self-proclaimed fashionistas, all cramming into the hallowed theaters of Lincoln Center to be front row when designers present their latest collections. Amidst the flurry of fashionistas, there will be another cause for celebration. While many will go through the annual fashion ritual  that takes place on the runway, another more culturally significant event will take place this month, Black History Month.

In celebration of the historical month, prominent African-American fashion insiders gathered in the Big Apple for Macy’s Soul Era to talk about the contributions of blacks in fashion such as historical fashion figures Elizabeth Keckley and Anne Lowe. They were behind the looks of First Ladies Mary Todd Lincoln and Jacqueline Kennedy respectively. Black culture has been a catalyst for major fashion trends and icons longer than most people are even aware. This was particularly true during the socially turbulent and ground breaking era of the 70s, when icons like Diana Ross (Mahogany) were blurring the lines between music and film, while ushering in the idea of aspirational dressing. 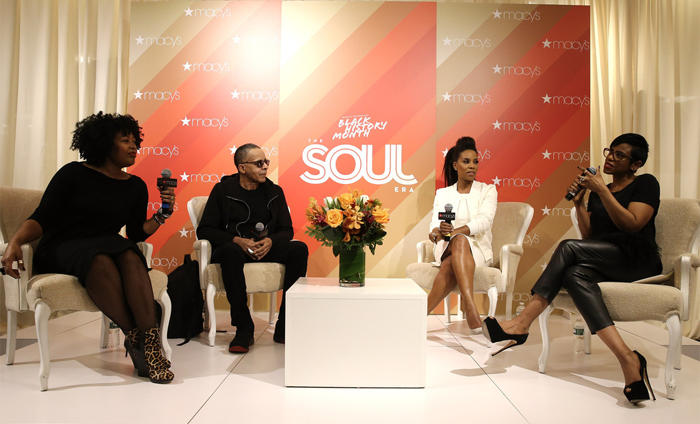 These influences and many more like them, were discussed at the Macy’s sponsored “Soul Era” reception in Herald Square. It was launched as a preface to fashion week, while simultaneously giving a nod to black influencers in the industry. A diverse panel made up of seasoned professionals including costume director Johnetta Boone (The Notebook, Beloved, The Wire), celebrity stylist June Ambrose (Jay-Z, Justin Timberlake, Pharrell), and iconic designer Stephen Burrows (The Battle of Versailles) weighed in on how the ‘Soul Era’ embodied a level of “glamour” in fashion that has staying power even today. All three agreed that fashion of that time remains significant due to the fact that it was intrinsically an outward celebration of freedom post the 60’s Civil Rights Movement.

As the talk continued, the audience was given a chance to ask unfiltered questions and chat with the panelists about everything from racial diversity and the lack thereof in the industry, to what kind of dress Pat Cleveland – one of the firsts black supermodels – wore at the closing of Burrow’s Versailles show; just one of many significant moments in history that links black history to fashion. With such a rich, vibrant culture of African American designers contributing to fashion on a historical level, it’s a wonder that more companies haven’t made an effort to acknowledge the contributions, before now. Bravo to Macy’s for what was an amazing and informative event. Macy’s Soul Era will be traveling to other cities including Philadelphia, DC, Chicago, San Francisco, and Los Angeles.

Deborah Metts is an East Coast agent who loves attending and covering New York Fashion Week. Her on-the-go must-haves include FIKA coffee, CO Bigelow Lotion, and shiny pair of menswear oxfords. When she's not covering a fashion event you can probably catch her hitting up a new eatery or art show in her Uptown nabe.