GLOBAL — It’s the 75th Hunger Games and the District 12 victors Katniss Everdeen (Jennifer Lawrence) and her faux Romeo Peeta Mellark (Josh Hutcherson) are once again thrown into ‘The Capitol’ ring for a fight to the death, this time against previous district victors in “The Hunger Games: Catching Fire.” Admittedly, I didn’t get the fanfare when the “The Hunger Games” hit the big screen last year. I hadn’t read the books so I didn’t understand the anticipation. In preparation for the newest film, I decided to put the action adventure sci-fi flick on my radar and checked it out on Netflix. I was instantly drawn to the engaging plot, stunning costumes, and eccentric characters. The story was something fresh and new, and frankly, a bit scary. After all, young people ages 12-18 have to take part in the unluckiest lottery ever, when their names are pulled from a bowl and then they are required to fight to the death against their peers. The film is riddled with political and social symbolism that actually gets you to thinking about the status quo of the real world including war, famine, poverty, even political corruption and classism. But in this second installation of the trilogy, it’s the acting and 5 actors in particular, that have captivated me most:

Donald Sutherland plays the ultimate villain as President Snow of ‘The Capitol.’ He’s the epitome of the ruthless politician; greedy and power hungry. In the film, his evilness is tempered by a showing of him with his young granddaughter who is a fan of Katniss and even wears a single one-sided braid in homage to the District 12 victor. The adoration soon becomes a thorn in Snow’s side.

Stanley Tucci is the quintessential character actor. As Caesar Flickerman he’s an over-the-top, eccentric host of The Hunger Games. He’s witty and sarcastic with impeccable comedic timing – and don’t you just love his lavender hair? When you watch him host the games and interview the contestants, it’s almost easy to forget that the game is a fight to the death.

Woody Harrelson as the drunken, but savvy Haymitch Abernathy is the most unlikely mentor to the District 12 crew, but manages to win you over. In the first film his initial “who cares” attitude made him easy to dislike, but it’s soon revealed he does care about the doomed contestants and he becomes a major ally for Katniss and Peeta – more than realized, unless of course, you read the books.

Elizabeth Banks is on point as Effie Trinket and the surname is so befitting the character. She’s impeccably styled, quaintly aloof, and eerily resembles a ventriloquist dummy wearing beautifully designed gowns that are reminiscent of the works of Alexander McQueen. With her ruby red puckered lips, blushed cheeks, and powdered skin – she’s Marie Antoinette 2.0, but instead of beseeching the peasants to “eat cake,” her mantra is even more marauding as she tells the ill-fated teens, “May the odds be ever in your favor.” But her persona softens in this film as she becomes more compassionate and empathetic towards the plight of Katniss and Peeta.

​Costume designer for the film Trish Summerville has created an amazing looks for the characters, especially Katniss’s frilly gowns and her wedding dress for the latest film. However, in the film, all credit goes to Lenny Kravitz as Cinna the stylist. You can almost picture him as a Parisian couturier who takes great pride in his masterpieces. That’s how he is in the film, creating emblazoned frocks for Katniss. But this stylist has more up his sartorial sleeves. 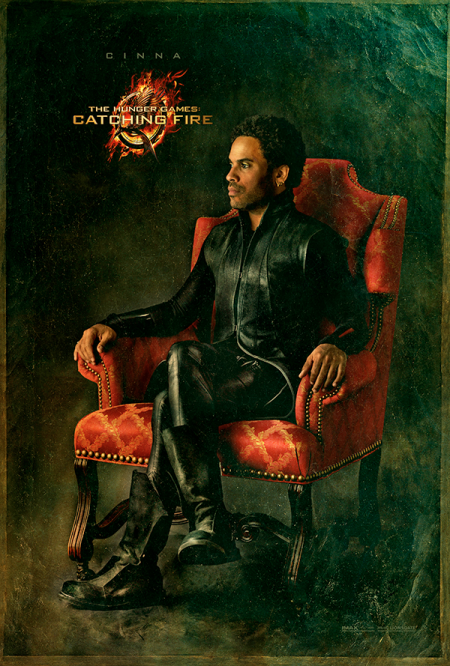