Affleck and Timberlake No Game in Runner Runner 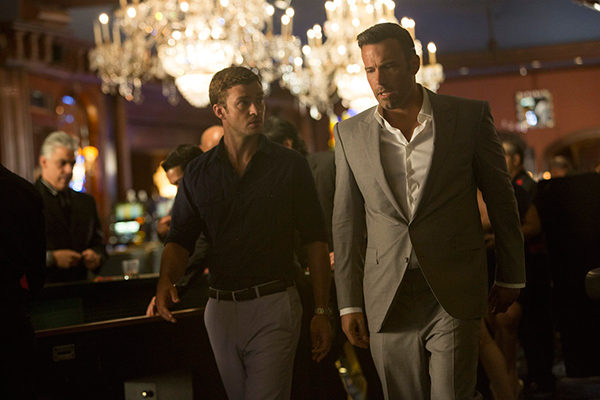 PLOT: Academy Award-winning Ben Affleck and Grammy Award-winning Justin Timberlake share the screen as leading men in the film Runner Runner. As you may have guessed it's good guy versus bad guy with Timberlake wearing the white hat as Princeton grad student Richie Furst who's working a side gig convincing fellow students to place bets online so he can earn enough money to pay his tuition. His entrepreneurial endeavors are discovered by the ivy league school and he's given an ultimatum; quit or be expelled. Furst decides to risk all of his savings in an online casino poker game and is on a roll when he increases nearly 18K to more than 50K. Things quickly go down hill, however, when the opponent he pegged as an amateur beats him. With the help of a friend he discovers the game was rigged and he sets off to Costa Rica to confront gambling Tycon Ivan Block (Ben Affleck) whom he believes is unaware of the online scam.

ENGAGEMENT: I had high hopes for this movie and excitement that Leonardo DiCaprio is one of the producers up until smart Princeton grad student Richie, who tripled his money while betting his savings continued to play, ultimately losing it all. Presumably, if you're a grad student from an elite school you're no schmuck, but that's just what Furst is. To make matters worse, he meets up with the casino owner Block in Costa Rica where he not only confronts him in his own place of business but is not leery when Block graciously offers him all of the money he lost online plus a little extra for good measure, and then invited to stay in Costa Rica a bit longer for a great business deal he just can't miss.

That's when you know it's time to run. But no, not the Princeton guy. He decides to stick around for a while and even invites his college friends to join him in his new utopic world with beautiful beaches, lovely ladies, and tons of cash. It all seems too good to be true until Furst encounters FBI agent Shavers (Anthony Mackie) who warns him of Block's illegal dealings and threatens to have Furst arrested if he doesn't help bring Block down. After telling Block what happened, Block quickly reassures Furst that the agent has no power in Costa Rica and they are doing nothing illegal. Not to include spoilers, but as you would expect, things soon unravel for Furst and his friends. It becomes so predictable it's almost sleep-inducing and the acting from Affleck and Timberlake is lackluster.

STYLE: The look is slick and tropical island-worthy with unbuttoned shirts atop wife beater tanks and Panama hats. Style takes a minimal role in this film, there's more flash given in a luxurious yacht and a beachfront estate that serve as backdrops during shady dealings.

This movie should be 50% on your radar.