Seldom are we regaled with stories of the people behind a brand such as the publicists, who tirelessly work to bring notoriety and sometimes fame to a product or person. Even less common are those whose work radiates so magnificently that their impact elevates the industry in which they worked.

Eleanor Lambert was one such person. She dedicated her career to championing the arts and its masters from visual artists to fashion designers. She saw fashion as an art form and was known world-wide for her contributions, which included founding the Costume Institute at the Metropolitan Museum of Art and organizing the Council of Fashion Designers of America (CFDA).

Having worked closely with Miss Lambert, writer John Tiffany, decided to author her biography, Eleanor Lambert: Still Here, chronicling her life and legacy. I recently caught up with Mr. Tiffany for a Q&A about his new book and what it was like to work for a legend.

The Chic Spy: What inspired you to write the book about Miss Lambert?

John Tiffany: I worked for Miss Lambert in 1995, and while working for her I knew some of the things she created – such as starting fashion week and the Council of Fashion Designers of America, but I kept uncovering many things she started as well as fashion design legends she discovered and worked for — and I thought there was certainly an intriguing story there.

TCS: What was the most interesting or intriguing fact you learned about Miss Lambert while writing the book?

JT: I always knew that she was a pioneer, but I think I started to get this feeling that she was really a rebel! I mean she looked like an Empress, but deep down she had a very revolutionary idea — which was that American fashion was as good as the French and Italians and that it deserved a seat at the table. It’s so accepted now, but when she first had that idea it was considered a revolutionary and foolish event. 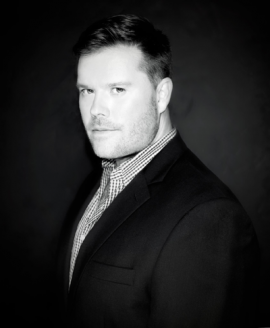 TCS: What do you hope readers take away from this book about Miss Lambert and fashion?

JT: I hope they have a whole new appreciation for the pioneers who made things happen. I hope they understand that one person can change a whole industry. I hope they respect working women a lot more.

TCS: Miss Lambert has made significant contributions to the fashion industry. How do you believe her contributions have impacted the industry?

JT: She single-handedly turned it from a “rag trade” into a glamorous business. By creating the CFDA and helping start the Council on the Arts as well as MoMA and the Costume Institute at the Met, she put the power in the hands of designers and artists themselves.

TCS: Fashion has a plethora of icons from actresses such Audrey Hepburn to designers such as Hubert de Givenchy. What legacy do you believe Miss Lambert leaves for fashion enthusiasts?

JT: Well, to me she should be the greatest icon of all! She somehow challenged Vogue and Harper’s Bazaar on the idea that American fashion was worthy and at the same time, she had to get her clients into their pages. She herself created institutions and events that have become iconic such as the International Best-Dressed List (now overseen by Vanity Fair), CFDA, CFDA Awards, Costume Gala at the Met, the Costume Institute at the Met, MoMA, Fashion Week (in NYC, Paris, Milan), iconic fashion shows — the first and only fashion show at the White House, the infamous Versailles Exhibition in 1973, and the Moscow Exhibition of 1959.

TCS: For those who have never heard of Miss Lambert and her contributions, how would you describe her influence on fashion?

JT: Her influence is truly unparalleled.

TCS: I read that you worked as Miss Lambert’s assistant in 1995. What was it like to work with her and how did you get the position?

JT: I was friends with James LaForce who was and is a close friend, he had worked for Miss Lambert a few years and he told me that Miss Lambert was looking for an assistant and I interviewed for and got the job. She was a very tough boss with very high expectations. She was a perfectionist. But she worked harder than anyone else and she was 92 at the time! She expected us to work hard too.

TCS: I also read that you interviewed Miss Lambert via phone while you were in high school in 1983. When you were her assistant, did she recall that interview?

JT: I did a speech on the Versailles Exhibition when I was in high school and my teacher said I need more sources, so the New York Times gave me Miss Lambert’s number and she happened to answer the phone. She gave me a quote on the exhibition and wished me luck. I reminded her about it when I worked for her years later, she didn’t remember. She asked me if my classmates were interested in my speech and I said no. She told me it was a good thing I was in New York City now! 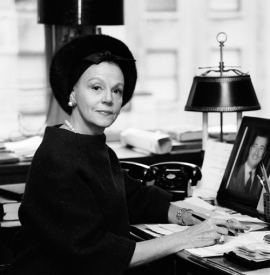 TCS: When you first met her in person, how would you describe her from a fashion perspective?

JT: I would honestly have to say she was one of the most confident people I have ever met. She was so sure of herself. I wouldn’t describe her in a fashion sense though. She was a very grand lady and I do mean “grand” in the most complimentary sense. She had style! She had her uniform, a tunic with matching pants, Belgian loafers (she had wore Vivier and David Evins high heels for years, but those days were over when I arrived), she had a huge crocodile Kelly bag, turbans and incredible jewels and brooches, she always looked impeccable each day. That was her style. She would wear Geoffrey Beene jackets and always looked modern, chic and full of style. She was intimidating. I think she liked it that way too – people certainly listened to her and she was almost always right.

TCS: As her assistant, you probably had the opportunity to see her private side, like her home. I read she lived on Fifth Avenue in Manhattan. How would you describe the aesthetic used to fashion her home?

JT: Miss Lambert’s apartment was better than perfect. It was so her – momentos from her travels all over the world. It was very grand – a pre-war apartment on Fifth Avenue with classic proportions overlooking the reservoir. It was very chic. It had French furniture and incredible art made by her friends and clients. It was beautiful, very lived in and not fussy, yet imperial in a way. The kitchen was amazing, a huge six burner original stove from the 1940s.

TCS: While doing your research for the book, did you find any interesting collaborations or communications between Miss Lambert and other notables?

JT: Yes! Miss Lambert knew and was friends with presidents, first ladies, kings, queens – people from all walks of life. She could get anyone on the phone in minutes. Madame Chiang Kai-Chek and Lady Bird Johnson popped into the office, there were calls from famous people all the time. I found letters from Jackie Kennedy, Grace Kelly, people on the best dressed list, telegrams from President Roosevelt, President Truman, President Eisenhower, President Kennedy, President Johnson, and President Ford – many of the first ladies too.

TCS: As a publicist, it seems Miss Lambert preferred to extend her influence from the background. What do you envision her saying if she had the opportunity to read your biography on her life?

JT: I don’t think it would be appropriate for me to put words in her mouth, but I can say that I felt guided by something she used to always say to us in the office. In fact she said it all the time, “You must always see what is not done and what should be done.” I felt that her story needed to be told and I also say that she was the one who told me to look things up in the files. So I created the book in a way that was factual. It is the story of a lifetime of amazing work.

TCS: After finishing the book, do you believe you missed anything that you should have covered?

JT: Well, it is a 320 page book that weighs 7 pounds, there were many more things I would have loved to include, but I worked with a truly incredible team. My editor and publisher at Pointed Leaf Press, Suzanne Slesin, who has an incredible background and expertise for guiding me and also the equally talented Sam Shahid who was art director of the book. All three of us were guided in telling the most complete version of the story as we possibly could. I am extremely grateful that as a first time author, that I was able to work with such a team and also had the luxury of telling the story.

TCS: If you could describe Miss Lambert in three words, what would they be?

TCS: Definitely a woman we would have wanted to meet.

For a chance to meet the author and snag a copy of the book, check out the details below for his upcoming book signings in San Francisco: