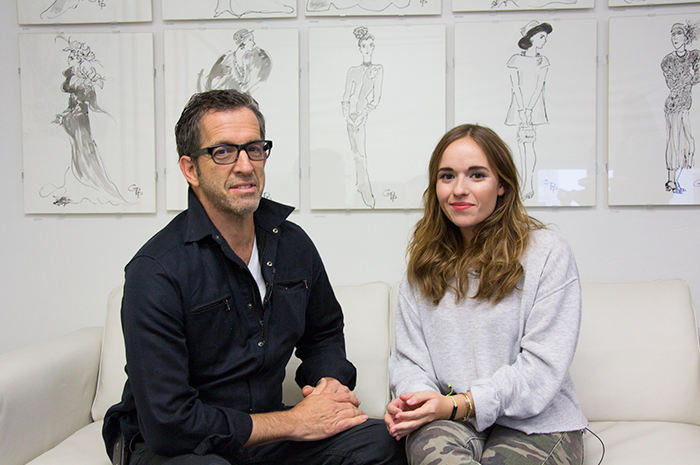 Bria Anderson
Bria is a West Coast agent whose passion for fashion keeps her inspired from day to day. She loves showing people how to spice it up and express a wow factor in their outfit. A few of her chic faves include Maybelline Great Lash BIG Mascara, “The Devil Wears Prada” movie, and mango shears.
more
Twitter Facebook Google + Tumblr

SAN FRANCISCO — What’s not to love when you have fashion designer, Kenneth Cole in your presence! It was fashion heaven for students at the Academy of Art University (AAU) recently as they sat in on a motivating interview with Kenneth Cole and Amy Levin, founder of College Fashionista blog. This was the perfect event for the fashionable students at AAU. The latest trends individualized and styled to perfection from lip tints to beach wave curls were all in attendance to become captivated by the words of American designer, Kenneth Cole.

Cole described his new book hitting the shelves, “This is a Kenneth Cole Production,” which takes his readers back in time through the journey that led him to his now, 30 years of success. Cole was very open during the interview and gave great advice to students eager to have a career similar to his, as he shared the sentiment that becoming a designer “has never been easier.” He informed the students that you must “define yourself in something that is you” and “understand your role and contribution.”

Cole started off describing very eloquently what he loves about the fashion industry. He shared his thoughts on how the fashion industry is individualistic in nature and how he likes to think of it as a powerful tool for communication and is a universal language. He explained how his job as a designer is to find out what consumers want and deliver it to them in a way that is unexpected. “My aspiration is to be apart of your brand. I define my brand through social media and we curate who we want to be a part of our world,” he said. “It’s all about making you look great so people say you look amazing and not, where did you buy that.”

We also learned more about his newest accomplishment in the fashion industry, his book This is a Kenneth Cole Production. We got an insiders look on the making of the book as he shared that it reflects back on his 30-year journey, and even though some say going to the past is treacherous, in the long run, he has earned the right to be chosen and or considered in the industry. Cole expressed that it was painful completing the book but such a great thing to have. He had his friend, who is a writer, co-write the book and together they made it relevant and interesting. “My book is more dynamic than your traditional book,” he said. He also expressed that it was a great experience to connect with a large audience in personal ways. Cole believes that if you can make volunteering in the community a part of your journey of school and other things that lead to success, the outcome becomes much more rewarding. Lastly, he announced that along with the book, they also launched the website 30yearsold.com simultaneously.

Aside from the fashion industry and his success, Cole is philanthropic and stressed that fashion needs to be relevant. He shared that talking about HIV/Aids is to talk about what no one wants to discuss and that his campaign, “Future of Our Children “ changed the brand and culture, and has changed him. Cole also discussed how his message on women’s rights have been taken as provocative, explaining how he’s received letters from customers that have said things such as “Stick to your damn shoes!” Although some may be turned off due to his message, he doesn’t do philanthropy to initiate commerce and for the most part, customers seem to embrace him being able to express himself. “The biggest risk is the focus not being on the product. Some people come up to me and say, I love your ads, and I always respond and say, what about my shoes?” he explained.

Cole was perfect at giving advice during the entire event. He shared with the AAU fashion students that there are “no rules today.” He stressed that when starting a business you have to build it on a platform that allows change. Allowing change has allowed such success for the Kenneth Cole brand. Amy Levin added to the inspirational mood saying that when she was a freshmen in college she had no idea that she’d be head of College Fashionista one day so you should definitely take advantage of all opportunities that come your way.

Even with everything that Kenneth Cole has done, he concluded discussing an awareness book from five years ago and if he could go back and do anything different he would have done more and started earlier as far as giving back.

Bria is a West Coast agent whose passion for fashion keeps her inspired from day to day. She loves showing people how to spice it up and express a wow factor in their outfit. A few of her chic faves include Maybelline Great Lash BIG Mascara, “The Devil Wears Prada” movie, and mango shears.