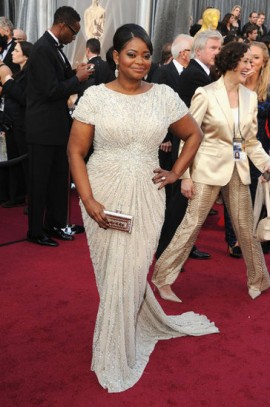 Los Angeles — Before "The Help" hit the big screen, I had the delightful opportunity to interview actress Octavia Spencer and director Tate Taylor about the period film that explored the tumultuous era of the 60s when racial tension was at its peak. It is no surprise that Spencer received her first Oscar nod for her role as outspoken Minny Jackson in the emotionally charged film. Here's an excerpt of her backstage interview at the 84th Academy Awards after her win, shared by an undisclosed covert agent.

Covert Agent: Congratulations. Obviously you must be so thrilled with this win. I was looking at some of the deleted scenes from the film and there was one scene where your character was at the bus stop and she was obviously beat up.
Octavia Spencer: Oh.

CA: Are you disappointed that perhaps the film didn't include that more tragic ending for your character, although it had some low points, it had some, you know, a little bit of a light hearted feel at the end?
OS: Well, I think that's all in your perception. No, I'm not disappointed that that scene was deleted. I think that we wanted to make the movie that Kathryn Stockett had envisioned when she wrote the book. I don't think there's anything light hearted about the Civil Rights movement, but somehow it makes it palatable when you see that type of strife.  So if you can have a laugh every other ten minutes while you watch the struggle then, you know, I have no problem with it.  But no, I'm not disappointed with any aspect of the film.

CA: There's something that stuck out to me in your acceptance speech and you thanked your [The Help] cast for how they helped you to transform into your character.
OS: I said that? I don't even remember what I said.  I'm sorry.

CA: Can you explain how did they help you?
OS: Well, it's very rare that you have the type of ensemble that we had. You know, you don't get all the Academy Award nominee winners and Cecily Tyson, Mary Steenburgen, Sissy Spacek, Viola Davis coming together to do a project.  And then you have the collaboration of Academy Award nominees behind the scenes.  We just left our egos at the door and worked together as one beautiful unit from Emma, Viola, Bryce, to Allison Janney.  I mean, it was an award winning cast.  So to be a part of that and to just sort of dissolve into the world that we were representing is something that we're supposed to do as actors but it was rare that we did it without judgment of each other.

Check out my interview with actress Octavia Spencer and director Tate Taylor:

CA: Would you sum up this award season for us and tell us about the love affair you had with "The Help?"
OS: Well, the word I want to use I can't. I want to say fan effing tastic. But we'll just leave the effing out. Fantastic. It is humbling. I am    I'm a benefactor of all of the riches that the real life Minnys, Aibileens, Constantines, Skeeters, and Celias that they basically repeated. So, I am very humble because I get to stand here and accept this award and I haven't really done anything. So I don't know.  That's a tough question to answer.

You have to believe in yourself and you have to work very hard. You can't ever think that you're the best thing since sliced bread.

CA: My question to you is that when you were walking up those stairs and by the time you got up there, a heartfelt standing ovation was given to you and you went into strictly emotions.  What were you feeling at that moment and what would you say to any young girl who would aspire to be in your shoes tonight?
OS: Well, get a great designer because you don't know if you're going to be on TV or not.  And really and truly I was just trying not to fall down because I had an incident where I fell at an awards show.  This is one of those evenings in my life that I'll never forget.  I hope it's the hallmark of more for young aspiring actresses of color, and by color I don't mean just African American. I mean Indian, Native American, Latin American, and Asian American. I hope that in some way that I can be some sort of beacon of hope, especially because I am not the typical Hollywood beauty … I just think that you have to believe in yourself and you have to work very hard.  You can't ever think that you're the best thing since sliced bread because I promise you, there are going to be Viola Davises and Jessica Chastains and Emma Stones who are the best thing since sliced bread. So take it seriously, but don't take it too seriously.

CA: The outpouring of emotion tonight for you and for your movie has been overwhelming, especially considering that you're a relative newcomer.
OS: Well, it depends on who you ask. Fifteen years, I'm a newcomer. Okay, I'll take it.

CA: This is going to open so many doors for you.  In your wildest dreams what is the one role that you want to play?
OS: I don't have one role that I want to play. I guess you know what, I want to be a producer. I want to be an activist. I want to be proactive in bringing about work for men, women, boys, girls, everybody who is good at what they do and deserve a shot at it. So I think my role, I want to have a presence both behind the scenes and in front of the camera. So I can't say on one particular thing, so I'll just name them all.  I'll be the jack of all trades and hopefully decent at one of them.

CA: You said in your speech that Steven Spielberg changed your life, and I just want to know if you can expound and expand on how he did that in your life?
OS:
Well, Steven Spielberg is a luminary and as far as I can remember in filmmaking, in every decade of my life he has been creating brilliance and he has this little studio called DreamWorks that could have put any zaftig actress with acting chops in my role, but he allowed my dear friend, Tate Taylor, to cast me pretty much unknown to most of you in that role when there were so many others that could have been chosen.  And that's the sign of a true filmmaker to allow a true filmmaker to do what he does.  So he and Stacey Snider changed my professional life, and getting the opportunity to play this role changed my life personally, as well.

CA: Tate was your date, too, right?
OS: Well, absolutely.  But now I have a different date.

CA: What will you do?
OS: Tonight?

CA: Tonight and then after that?
OS: Well, tonight I am going to find my cast mates and we're going to, you know … I'm actually going to have a quarter of a glass of champagne and hang out and I think we all start projects within the next couple of days. But I'm just going to live in this moment because it's never happened and Lord knows it may never happen again.