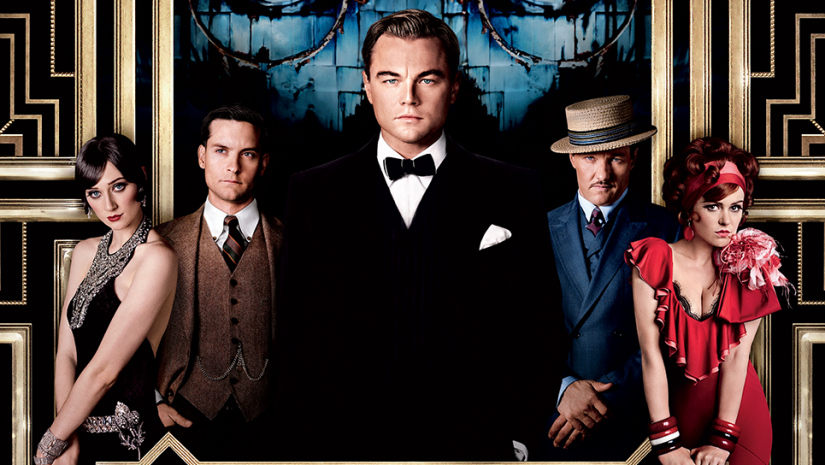 PLOT: Unless you've been tucked beneath a rock for the past year, you've undoubtedly heard about Baz Luhrmann's film adaption of F. Scott Fitzgerald's The Great Gatsby; a story about the rich and elusive Jay Gatsby (Leonardo DiCaprio), known for throwing lavish parties, at which he is seldom seen.

Since first reading the novel as a tweener, I pondered whether it was really about Jay Gatsby or the narrator Nick Carraway (Tobey Macguire). Is it Carraway's ambition of financial success and desire to fit in with the well-to-do that is the focus; or is it about Gatsby's devotion to the self-centered Daisy, which we are glaringly reminded of throughout the film in the form of a daisy motif. It's in his sprawling courtyard, on a duvet cover for his bed, in the bottom of his pool, and on a signet ring he wears on his pinky finger?

Carraway seeks fortune on Wall Street as a bonds salesman and lives modestly in a cottage in the nouveau riche area of West Egg next door to Gatsby, who is determined to win the heart of socialite Daisy Buchanan (Carey Mulligan). Daisy is married to Tom Buchanan (Joel Edgerton) and lives in a mansion in old money East Egg directly across the river from Gatsby. Gatsby frequently stares across the river at the Buchanan estate and observes a green light intermittently shining, almost like a beacon of hope.

ENGAGEMENT: The story has been told before – in a novel as well as onscreen adaptions. So, it's unlikely anyone can say they've never heard of "The Great Gatsby." But it's as if Luhrmann gives us a peak inside the mind of Fitzgerald as he concepts the elaborate tale featuring Gatsby in all his glory wearing a tailored pink suit, driving a fancy yellow car, and living in a castle-like estate.

It's then that we might see what Fitzgerald saw; a grand spectacle with vibrant visuals such as a raging cocktail party hazed by fluttering confetti, majestic mansions towering above, and the sound of jazz tunes rythmically infused with booming beats. Luhrmann's version is modernized. Not only does he deliver it with accuracy, but brings to life the glitz and glam, as well as the doom and dispair Fitzgerald presumedly envisioned when penning the epic tale.

STYLE: As captivating the dialogue, imapctful the imagery, and solid the acting – so are the costumes. It's the climax to the film, giving the actors the final element needed to create their characters, from Gatsby's flamboyant suits and brighlty-colored broadcloth shirts to Daisy's embellished gowns and jeweled accessories.

The impeccable style showcased in the movie is owed to Luhrmann's wife and the costume designer for the film, Catherine Martin. She orchestrated the costuming from head-to-toe, shrewdly enlisting the expertise of Miuccia Prada, Brooks Brothers, and Tiffany & Co. Prepare to be regaled with costume finery not seen since Audrey Hepburn graced the big screen in "Roman Holiday" (1953). Martin definitely channeled the styling prowess of costuming legend Edith Head for her work on the sartorially savvy film.

Perhaps Jay Gatsby is right when he declares to Nick Carraway that the past can be repeated. Baz Luhrmann has taken us back to a place and time in American culture filled with a sense of prosperity, indulgence, and wreckless abandon that was the zeitgeist of the 1920s and I was happy to take the plunge into the past, even if for a brief moment.