The scene backstage at Lincoln Center the day of the show on Valentine’s Day, was extremely fast paced yet very organized, with a huge number of people working to complete varied tasks all within a short span of time. Each station backstage was arranged in a systematic way for efficient, speedy work for this large scale production. To get every facial feature covered in the short time allotted, multiple artists worked on each model simultaneously. One artist worked on makeup while a hairstylist perfected the model’s hair. 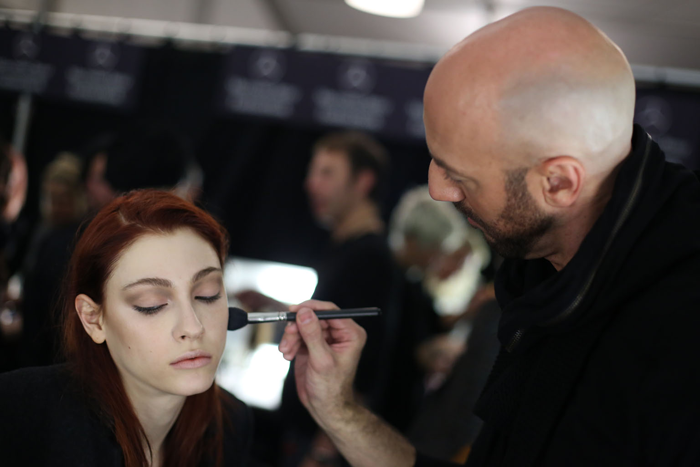 Cembellin masterfully created the looks on the models using several key products, including MAC Cosmetics Studio Waterweight Foundation, which will be released in the fall. The MAC Pro team also used sculpting product ‘Baby Don’t Go’ Pro Longwear Blush along with ‘Hush’ Cream Color Base. Instead of playing with color, the team of artists experimented more with placement, shapes and tones.

Jeanie is a West Coast agent, who loves to wear maxi dresses and platform sandals, enjoys yachting and traveling with her Twin Flame and fine dining. Her two favorite accessories are a brass armlet from Italy and her Marc Jacobs hot pink "Rana Pouch" with a brass upside-down lucky love frog.