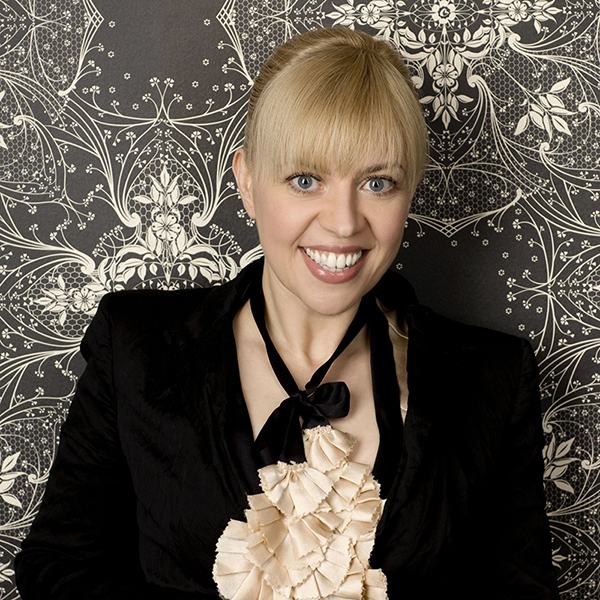 In less than two weeks, Baz Luhrmann’s The Great Gatsby film, adapted from F. Scott Fitzgerald’s epic tale about the decadent 1920s, will hit the theaters in 3D on May 10th. Leonardo DiCaprio and Carey Mulligan co-star in the much-anticipated film as Jay Gatsby, the opulent bootlegger and Daisy Buchanan, the glamorous socialite. But they’re not the only characters set to mesmerize us on the big screen.

A major character, not to be dismissed, is costuming, which was chicly orchestrated by the films costume designer Catherine Martin who collaborated with Miu Miu, Prada, and Brooks Brothers for fashions and Tiffany & Co. for jewelry. The jewelry collection created for the film is exquisite, with detailed designs reminiscent of the Art Deco period such as the jeweled headpiece Daisy Buchanan wears and signet ring Jay Gatsby sports in the film. Get the deets in a Q&A on what inspired Catherine Martin (above) and why she chose Tiffany jewels for the film.

What are your design inspirations?

I take my design inspirations from many sources. But when you’re working with a director and you’re trying to interpret his vision for a film, the very first inspiration is always how the director envisions telling a story and your job is to help support that telling. In the design process for a film, I look to original sources that relate to the work that we are trying to bring to life, including photographs, paintings, other works by the author, photographic collections and anecdotal descriptions that were written in the period or setting in which the story takes place.

Tiffany & Co. is historically relevant as the luxury American jeweler of the time. How does this help in the design of the jewelry as it related to the filmmaking process? Was this the first time you designed jewelry?

Tiffany & Co was an obvious partner for The Great Gatsby because of its authentic relationship to New York, the fact that the social milieu the novel deals with is the type of customer the brand appeals to, the fact that it is a quintessentially American luxury brand and also because Fitzgerald was himself a customer of Tiffany & Co. This authenticity meant the brand was a perfect fit as the producers of the jewelry for this film.

This has been the first time that I have been involved in the process of designing jewelry and while I’m used to working with detail as a costume and set designer, there’s a different scale to the level of detail, craftsmanship and precision needed in designing jewelry. It is on a completely different level because you are engineering something so beautiful and so seemingly delicate that actually has to function practically and have inherent strength and longevity. 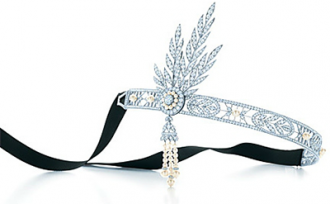 How did the Tiffany archives inspire you, in terms of the costume and design story?

The item that really inspired me from the archives was the drawing of the headpiece that inspired Daisy’s party headpiece. I felt it defined Daisy’s character and describes the 1920s so quintessentially that I could not ignore it. The extraordinary combination of pearls and pavé diamonds culminates in an exquisite and delicate yet dramatic headband that has become one of the most iconic pieces of jewelry in the film.

As a designer, you define characters visually and use wardrobe to further tell their story. How do the Tiffany & Co. pieces add vitality to the movie? Do you feel the actors benefit from having these kinds of collaborations as an extension of their character? 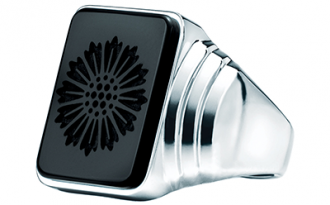 I think that having such genuinely exquisite and luxurious jewelry pieces adds to the characters’ visual development because these pieces reflect their status in society, their wealth and their ability to buy beautiful things. I think that certainly in the 1920s and even today, fine jewelry is a way of publicly announcing your success and wealth and this is something that Tom Buchanan does with his wife. In addition to the production value of using authentic fine jewelry, the use of these incredibly valuable pieces helps immerse the actors in the world of the character they are inhabiting.

Which pieces are most integral to the film? What is your favorite piece(s) and why?

Gatsby’s signet ring with the Daisy symbol is our nod to his obsessive love for Daisy. It is a very integral symbol in the film because it has been reproduced in his house, on his person and everywhere you look in his mansion, he has applied a daisy decoration. The daisy, traditionally a symbol of purity is meant to signal to the audience his pure, obsessive and overwhelmingly powerful love he has for Daisy. 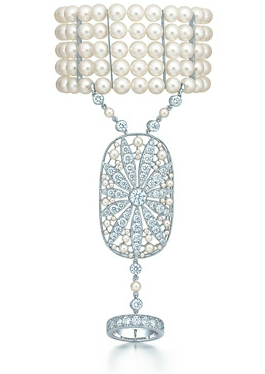 What inspired you to create the pearl and diamond bracelet worn by Daisy in the film?

In thinking about how we could use jewelry to help express Daisy’s character in her close ups, Baz suggested I look at the combination of diamonds and pearls as this refined classical and rarefied combination seemed to reflect the rarefied and coldly sophisticated world of the Buchanans. I turned to the diamond and pearl inspiration from the headpiece illustration … It seemed a great way to describe Daisy’s position in society and to underline her situation as Tom’s bird in a gilded cage, adorned by precious jewels.

I had also found an illustration from the 1920s that showed a bracelet design with a compact attached to it that sat on top of the hand and fitted with rings. I also have a fascination with India and combined the traditional Indian shapes with this idea to create the pavé diamond daisy medallion that is the centerpiece of the hand pieces. All these elements and influences were brought together to create these hand pieces that, along with the headband, became a quintessential part of Daisy’s party costume.

To view more of the collection visit tiffany.com.