Lindsey Thudin
Lindsey is a West Coast agent who has worked in the fashion and entertainment industries for several years.
more
Twitter Facebook Google + Tumblr

SAN FRANCISCO — Charming, intelligent, talented and definitely easy on the eyes; that’s how I’d describe actor Joseph Gordon-Levitt (Inception, The Dark Knight Rises). I was so busy swooning over Gordon-Levitt’s boy-next-door charm, I nearly missed recording our interview when we sat down to discuss his new film “Don Jon,” which he not only stars in, but also wrote and directed. Gordon-Levitt describes the film as “a comedy about a boyfriend and a girlfriend where the guy watches too much pornography and the girl watches too many romantic Hollywood movies. You know they both sort of have these unrealistic expectations and keep missing each other.”

A witty, sexy, comedy starring powerhouses like Julianne Moore and Scarlett Johansson, it’s hard to believe that this is Gordon-Levitt’s first attempt at directing. “Having done this for so many years and having been on so many sets, I feel it was a huge part of why I was able to pull this off,” he explained. He was also quick to point out that learning from the likes of Steven Spielberg from “Lincoln” (2012) and Christopher Nolan from “The Dark Knight Rises” (2012), didn’t hurt either. “They’re different guys, but they all have this thing in common, which is to keep a balance between having a thorough plan, but also being able to be spontaneous. So much of what I love about the performances in “Don Jon” are the actors sort of spontaneously doing something that was different than what I expected. I loved those moments.”

More from the Q&A with Joseph Gordon-Levitt:

I’ve been working as an actor since I was young and I think probably because of that I’ve always paid a lot of attention to the way the TV, movies and all kinds of media affect how we see the world. I think sometimes the things we see in the media give us unrealistic expectations for life, and especially love, and sex, and relationships. I wanted to tell a story about that.

I’ve always paid a lot of attention to the way the media influences how we see the world … that’s what sort of started me writing it and the writing just kept going well, until I had something finished. I can’t say from the beginning of the writing process I knew for sure this is going to be my first. I was just enjoying writing, but eventually I finished it.

The character Jon and “Jersey Shore” …

I lived in New York on and off for like 10 years. So, I’ve been around plenty of East Coast culture. It’s a movie about a guy who is very much trying to fit into a mold … here’s what you’re supposed to be, now be it. When I was thinking of who is a contemporary Don Juan, this was the first guy I thought of. This sort of East Coast womanizer, you know, with the gym body and the shiny hair. People keep bringing up Jersey Shore and I’d never seen it. I had never seen Jersey Shore and that’s the honest truth.

The leap from acting to directing …

I’ve always been fascinated by all the different parts that go into filmmaking. For my 21st birthday I bought myself a copy of Final Cut, the video editing software, and I think once I started editing that’s when I loved it, because when you start editing, that’s when you’re making movies. And I found that through the writing process I wasn’t just thinking about the dialogue, I was thinking about here’s how the camera would really make this work, or here’s how the editing would compliment the story point, here’s how the music needs to be for the scene to be what I’m picturing; and so by the time I finished the script I’d thought of all this stuff. So I set about trying to make it happen.

HitRECord, thanks for asking! So, hitRECord has sort of been my moniker for years. And this is the first movie that has its name, hitRECord Films on it. On hitrecord.org there is this open collaborative process where we make all kinds of things. I hope that one day we can make a full length feature film on hitrecord.org. But I thought before doing that it was important to direct a film in the old fashioned way.

Right now we’re making a TV show on hitRECord and that is fully open, fully collaborative. I’m directing it but everybody is contributing to it right now, these days. And just to clarify it’s not people contributing finished stuff that I then pick, it’s we have theses collaborative projects going and people contribute their parts and I direct. And I put out videos everyday sort of offering direction and feedback and by being on the site and writing comments and we’re making all these little projects.

Lindsey is a West Coast agent who has worked in the fashion and entertainment industries for several years. 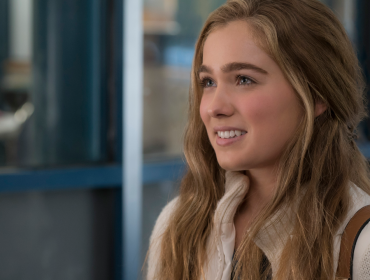