SCOTTSDALE – My latest mission took me to the hottest sartorial event in Arizona, where a crowd gathered for Phoenix Fashion Week (PHXFW) at Talking Stick Resort this Saturday evening for the last night of festivities in the five-day event. The onlookers, including myself, eagerly awaited the parade of fashions from established and emerging designers to commence amidst a backdrop of the beautiful Valley desert and a nearby pool where the runway was set up just outside the resort.

Inside the resort the vibe was energetic at the Style Villa Marketplace, which had a blossoming crowd of shoppers and fashion enthusiasts visiting the different booths, from the Toni & Guy station where you could have your locks quickly fashioned into a stylish braid style; to Beautiifash, where you could participate in a raffle and win a clutch or custom order your very own. I opted for the latter and can’t wait to receive it, but you’ll have to wait to get the deets on my custom clutch – all I’ll reveal is that it’s orange. Shocker, right? All the designers showcased their looks so that style mavens, ranging from bloggers to boutique owners, could have the opportunity to see what was available from each designer before seeing the collections on the runway.

Outside was the Cabana sponsored lounge chock full of media professionals prepping for interviews for after the show, and mingling on pillow-laden, plush couches while sipping cocktails – I had a delish drink I thought was a ‘Covergirl Cosmo.’ There was also a DJ spinning beats making the ambiance reminiscent of a night out at a posh hot spot.

The show opened (fashionably late of course) with an introduction from former Miss Arizona Brittany Dawn Brannan, who in a figure-hugging asymmetrical taupe jeweled mini dress, welcomed the boisterous crowd to 2013 Phoenix Fashion Week and introduced Executive Director Brian Hill, who graciously thanked guest, sponsors, and spoke enthusiastically about the designer collections about to hit the catwalk. The parade of fashions began with lithe models from Agency Arizona strutting down the runway to booming music, showcasing designer garb that ran the gamut from lavish gowns to avant-garde creations. 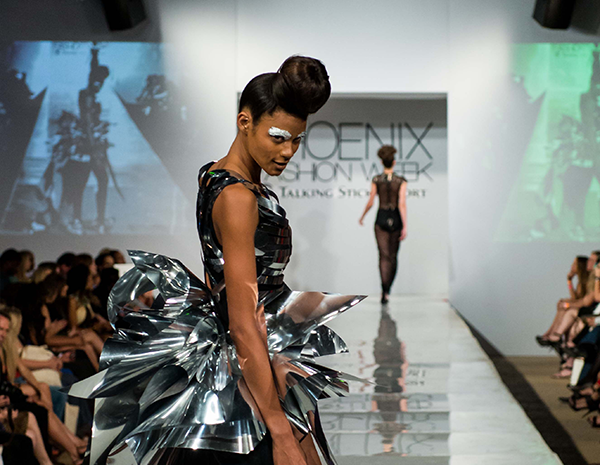 Enzoani presented an array of evening wear from red carpet-ready looks to wedding gowns with layers upon layers of tulle and detailed embroidery work.

Silvia Bours, one of my favorites and who also showed at 2012 PHXFW, featured frilly frocks with full skirts lined in tulle and embellished with beading. The collection was very ballerina-esque right down to the sky-high heels with sheer ribbon wrapping the ankles.

Then there’s Élevé​e, words can’t describe what designer Percy Knox, who’s also an advisor for Phoenix Fashion Week, does for menswear. The line, which originally catered to male athletes, has definitely been fashioned for mainstream. The detailed tailoring and modern cuts of the suiting and coordinated pieces from the collection included evening wear such as a tux with a burgundy jacket as well as outerwear like a plaid double breast top coat, are a work of taut construction and skilled craftsmanship. Knox credits his design team for the contemporary aesthetic explaining that young designers keep the line fresh. A few of the looks had me exclaiming, “Chuck Bass of ‘Gossip Girl’ would so love this!”

Doux Belle by Rachel Wagner – whom I had an opportunity to interview a few weeks ago – paid homage to Old Hollywood glamour with looks evoking the 20s, 40s, and 60s. My favorite looks from this collection (but it’s so very easy to love them all) include a knee-length roaring twenties flapper-style, cream-colored dress with fringe strips and a black floor-length gown with low cut back and circular disc embellishments on the skirt of the dress that gathered up into a bustle in the back. It was accessorized with an oversized vintage-inspired feather hat. The look was quintessential Audrey Hepburn as Eliza Doolittle in “My Fair Lady” (1964).

J’aire, a line from two sisters Nekia Hattley and Ja’ire, who describe their designs as “edgy and daring,” was next. Their presentation kicked off with Ja’ire, who’s also a singer, introducing the collection with a song that segued into the presentation. The line highlighted a woman’s curves with figure-skimming looks, like their signature hand-painted bustier with Swarovski Crystals that was paired with a form-fitting long skirt.

Michelle Hébert presented next with an ethereal collection using materials such as chiffon, feathers, and twigs that were reminiscent of Alexander Mcqueen’s artistic showmanship. Hébert says she was inspired by the works of iconic designers Alexander McQueen and Givenchy. The scene stealer was a dress fashioned from twigs called ‘Mika’ that she named for the first model to wear the nature-influenced design. Michelle explained the intense labor that went into creating the dress, which took more than 100 hours over the period of a week. She said spraying the twigs individually “gave it that nice texture so it wasn’t all light, but light and gray.”

Closing the emerging designer presentations was Trang Nguyen with a red and white theme and a feeling of romanticism with soft flowing fabrics, vibrant floral prints on white, and a head-to-toe fiery red lace gown with veil and a white sash for contrast.

And just when I thought the show had concluded, the designer finale began. Rocky Gathercole from Manila, who was not able to attend, concluded the evening with that kind of jaw-dropping, awe-inspired drama one would expect to see at Paris Fashion Week. The looks were breathtaking, fashion-forward, and avant-garde with showstoppers like bejeweled tops that I liken to Venetian masks, secured to the models with merely a satin ribbon. These amazingly adorned tops were paired with a simple, yet impactful panty brief. One look I especially loved was made with feathers and appeared as wings, not resting on the back, but positioned in the front as if the wearer was preparing to take flight. There was even a sleek futuristic silver foil design – down to the shoes – with loops and rings of metallic material that made this a look worthy of “The Fifth Element” (1997). As if that were not grand enough, Gathercole’s show closed with a flowing white gown with a bodice resembling icicle formations. It was beautiful, it was exquisite, it was Phoenix Fashion Week.

Scottsdale Fashion Square Is Getting A Makeover